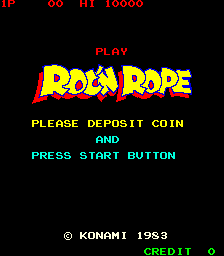 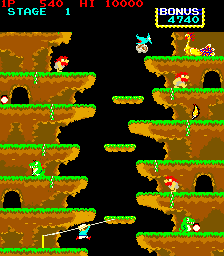 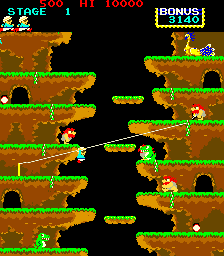 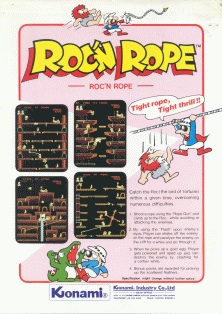 The player has to avoid ferocious man-sized dinosaurs and belligerent red-haired cavemen against which are there aren’t direct means of offense. The only ways to defeat the opponents is either temporary (dazing them with the flashlight) or indirect (waiting for them to be suspended on a harpoon rope to make them fall down), an element which adds a certain amount of trickiness to the game. Bonus items to collect include fallen phoenix feathers and phoenix eggs, which grant the player invulnerability from the prehistoric denizens for a short period of time.

* FPGA conversion by Arnim Laeuger, based on Pooyan by Dar (darfpga@aol.fr)

IMPORTANT NOTE :
NO ORIGINAL ROM CONTENTS ARE IN THIS DISTRIBUTION. YOU WILL NEED THE ORIGINAL/ALTERNATIVE ROM FILES TO RUN THE Roc’n Rope GAME. All logos are copyright to the respective holders.